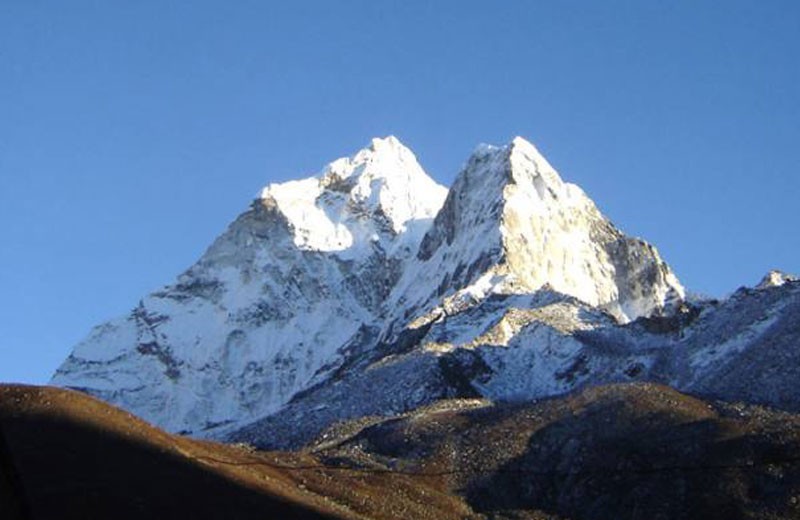 Ama Dablam is one of the most elegant peaks in Nepal and beyond. It is thought of like the Matterhorn of the Himalaya. In appearance, the two beautiful peaks resemble each other. Ama Dablam  6,812 mt / 22,349 ft is found in the Khumbu Region south of Everest and was first climbed in 1961 by an international team. It towers above the famous Tengboche Monastery from which the view is unforgettable. It is one of the most alluring peaks in the Himalaya and attracts climbers from around the world aiming for its summit. Ama Dablam is the third most popular peak in Nepal.

An expedition on Ama Dablam is shorter in time compared to higher expedition peaks and thus more affordable. Generally, it can be accomplished within thirty days Kathmandu to Kathmandu.

The summit route follows the southwest ridge approach and includes three camps. Ama Dablam expeditions are generally in the Spring or Autumn and can be undertaken throughout the year. The Ama Dablam Expedition is a fully supported journey and we are with you in all ways every step of the way with Himalayan veteran Sherpas. You will be with knowledgeable, experienced specialists that take your well-being personally and offer the best chance of summit success.

The approach starts with a trek to Nepal’s iconic Khumbu Region. The highland terrain of the Khumbu offers a spectacular array of snowy mountains, remote Sherpa villages, and majestic Buddhist monasteries and will be unforgettable.

The journey begins with an enchanting hike from the lowlands or a quick and picturesque flight to the high altitude airfield at Lukla from Kathmandu. Our team assembles in Lukla and together we ascend through the famous locations of the region including the sprawling Namche Bazaar. After ascending to Base Camp we meet more crew and refresh our climbing skills. Along the journey, we include adequate rest days to ensure acclimatization. On these days, we take the chance to explore the beautiful surrounding area while we become accustomed to the altitude.

The timetable is planned by veteran climbers with special attention to season and safety. We always adhere to the highest safety standards and ensure that this trip is designed for comfort and well-being, especially by following a graded ascent with proper acclimatization.

In Kathmandu, we begin with team introductions and expedition briefings, equipment inspection and other preparations. We arrange a crew of porters and sometimes yaks to transport provisions and gear, including food and a dining tent, tables, chairs, a toilet tent and personal, high-performance sleeping tents. At base camp, our skilled chef will provide the day’s meals and in the evening we will enjoy a magnificent camp under the stars, surrounded by the Himalaya and jaw-dropping surroundings while we enjoy a supper and a warm drink.

We are devoted to the highest standards in the industry and look forward to guiding you on the adventure of a lifetime to the top of one of the Himalaya’s most beautiful peaks!

Let's plan your next trip together