Mustang has become one of the dream destinations for many people. Until 1922, tourists were prohibited to enter the forbidden kingdom of Mustang. After 1922, Upper Mustang was made accessible to tourists with some special trekking permits.

Upper Mustang consists of deserts, medieval rock caves, and the interesting Buddhist culture. You will get a chance to explore the most famous places of Mustang such as the hidden kingdom of Lo Manthang, Jomsom, Muktinath temple and many other villages. You can also visit Buddhist Stupas and monasteries.

Many people may not prefer visiting Mustang during winter (December, January, February) because the area faces a harsh weather condition during this time. You may have difficulty in finding teahouses and restaurants at this time. 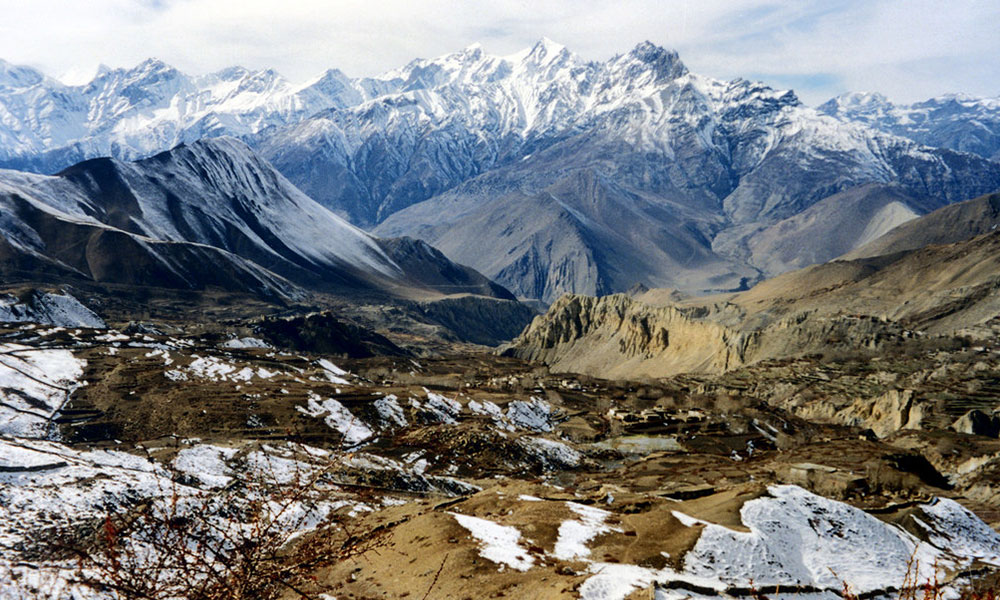 During winter, Upper Mustang becomes really cold. You can see almost every places covered with snow. The forbidden kingdom of Upper Mustang, Lo Manthang, faces a continental climate. The temperature of the region starts to fall as soon as the sun goes down.

During winter, many people descend down to a lower altitude such as to Pokhara and Kathmandu. The people move down because of the unbearable low temperature in the region during winter.

The temperature of Upper Mustang in December

The weather and temperature of Upper Mustang in December range from 9 to 12-degree Celsius during the day time and at night it may range from 0- 5 degrees. December is not the coldest in Upper Mustang.

The temperature of Upper Mustang in January

January is the coldest month of the year in the Upper Mustang. The daytime temperature of Upper Mustang may range between 1-9-degree celsius whereas in the night, the temperature reaches to -20 to -25 degrees.

Temperature of Upper Mustang in February

February in the Upper Mustang may not be as chilly as January. The average temperature of the region ranges from 9- 14 degrees during the day and at night the temperature may vary from 4- 5 degrees. 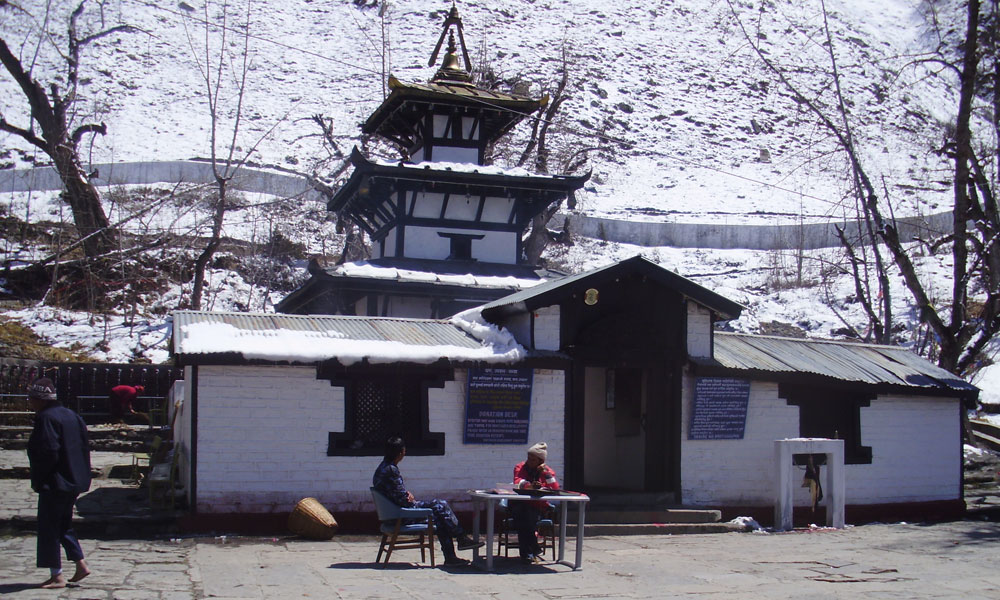 Like in the Upper Mustang, you may not see many people migrating to a warmer place in Lower Mustang During winter. It is because the temperature is quite bearable although it is cold.

Lower Mustang trek is possible during winter. You may expect your trails to be covered with snow. But this may not cause you any difficulty while trekking. So, you can enjoy your trekking experience to the Lower Mustang during winter too.

Winter is one of the least preferred time of the year, especially for Upper Mustang trekking. You rarely find trekkers to the Upper Mustang during harsh weather in winter.

The temperature may range from 0-5 degrees during the day and at night the of the place may even fall to -20 to -25 degrees. Because of the extreme and unbearable freezing temperature people avoid trekking.

Many trekking trails may also be closed because of the heavy snowfall. Reaching to the altitude of 3800-3900 meters might be quite challenging. You may get prone to altitude sickness.

Food and Accommodation of Mustang Nepal in Winter

Many people in the Upper Mustang are engaged in providing teahouses and accommodation facilities for different trekkers trekking to the Upper Mustang. Because of the harsh cold of the winter season and less number of trekkers during winter, the people of the region usually migrate to the cities such as Kathmandu and Pokhara. Hence, most of the teahouses will be closed. A very few of them might remain open with least of facilities and food supplements.

If you are someone who has a high demand regarding the food, winter might not be a perfect time to go to the Upper Mustang. The choice of food will be very limited at the end of the winter as the villagers may run out of vegetables. Although you may not find varieties in the food items, they are delicious. 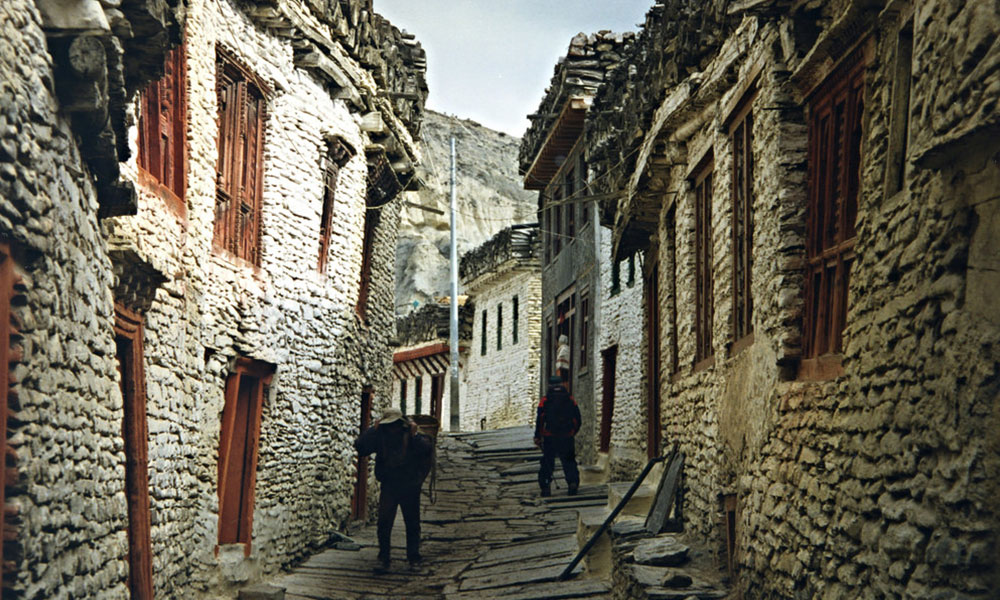 Some Tips for Upper Mustang trek in Winter

There are many culturally significant places, stupas, monasteries and major festivals in Mustang where you can a have a totally new experience. Let us discuss some of the major attractions of Mustang during the winter season.

La Phewa is a major festival Of Mustang that is celebrated in the month of January every 12 years for 18 days. The festival is celebrated with the motive of bringing different clan members together such as Sherchan, Bhattachan, Gauchan, and Tulachan of the Thakali community.

The ceremony is performed by dramatizing the histories and origin of the Thakalai community along with reciting chronicles. Four structures that represent the deities of four clan groups are carried to different places during this festival. The last festival was held in January 2017.

Toren La is a major festival celebrated by the Thakalis as their New Year for a week in the Thak Khola Valley. This festival falls in the month of February. Various rituals are performed in this festival along with worshipping the ancestors, singing, dancing, and archery.

You may get a chance to explore the Thakali culture and tradition and interact with the local people of the region if you visit Mustang during the winter season.

Muktinath Temple is one of the most sacred places for both the Hindus and the Buddhists in Nepal. It is located at the height of 3710 meters along the way to the Upper Mustang. The temple is mostly visited by the Hindus and Buddhists because of immense cultural value.

You can find 108 waterspouts around the area of Muktinath. It is believed that people who take a bath at these waterspouts will increase salvation. You can also see a sacred fire burning that emerges from the ground.

Lo Manthang is a rural area in the Upper Mustang which is 50 kilometers away from the Tibet border and 250 kilometers from the Indian border. It was a preserved and restricted destination for tourists previously.

Lo Manthang dates back to the 7th Century AD. Later it was regarded as an independent kingdom in 1380 when a warrior Ame Pal along with his sons defeated the warlords and established the walled capital of Lo Manthang. You can still find some Yolay families living in the 4-story palace of Lo Manthang.

Trekking to the Lo Manthang is also popular where you will walk through the barren landscape and explore the wonderful scenery of the region.

Visiting Upper Mustang during Winter will be very chilly but you will have a wonderfully exciting experience too. If you are someone who loves solitude and the calm landscapes, you are definitely going to enjoy your Mustang, Nepal trip in the winter season too. You may have to face some challenges while trekking to the Upper Mustang, but with proper tools and equipment, you may not have to face difficulties.