The Annapurna circuit trekking is notable for its wide climatic changes, gorgeous Himalayas, diverse terrains, wild sceneries, rich traditions, and culture. The trek will also take you to the world’s deepest gorge, Kali Gandaki gorge. The view of gigantic Annapurna I and the Dhaulagiri Himalayas rising towards the east and west of the gorge is amazing.

This trek begins from the capital city of Nepal and takes you to the rugged trails of Himalayas. You can also visit the beautiful villages like the Manang, Ghorepani, Chame, Jomsom, and many others. At the villages, you can see different ethnic groups, cultures, and traditions.

The Annapurna region is rain shadowed region. Thus, this region receives less rain than the other trekking destinations in Nepal. The places on the trek aren’t all sheltered from the rain. However, the northern part of the trek receives less than 10% of monsoon rainfall.

While trekking from the lower regions, at Besisahar to the highest point at the Thorong La pass, this trek experiences a wide range of climatic variations. The temperature and weather differ drastically with the changing altitudes. Temperatures are greater at the lower regions and it increases with altitude gain.

The Annapurna Circuit Trek 14 days is notable for its climatic variations. Thorong La pass is a high altitude point where the weather and climatic conditions remain quite unstable. The Mustang region is a much drier semi-arid region. You can experience the various weather and temperature while walking from the beautiful subtropical meadows to the semi-arid lands, and to the snowy adventures at Thorong La pass.

Autumn (September, October, and November) is a popular season for trekking in Nepal. In Autumn, the weather and temperature in the Annapurna region continue to be stable for months.

Autumn arrives as monsoon ends. Thus, the environment becomes clean and clear with the clouds of dust settled down and the dark clouds cleared. The monsoon rain leaves the forests and hills clean and green.

In the Autumn months, there will be lots of trekkers trekking in the Annapurna region. The flock of trekkers walks into popular trek routes like Annapurna Base Camp trek, Ghorepani Poon Hill trekking, and Annapurna Circuit and Tilicho lake trekking.

Weather and Temperature in September

September is a transition month between monsoon and autumn. The traces of monsoon rains still remain in early September. The rainfall isn’t as heavy as in monsoon. You might encounter only the short bursts of rain.

Monsoon ends completely during late September. Trekking to Annapurna Circuit in September has its own perk. You can enjoy the trekking experiences as in October and November without having to see crowded trails and teahouses.

Weather and Temperature in October and November

The weather and temperature at Annapurna Circuit are quite similar in October and November. The weather is stable and clear with best views of the glistening Himalayas, valleys, hills, and mountains.

The lower region in the trek is warmer with daytime temperature averaging around 15 degrees. Nights are colder than the days. The nighttime temperature can drop to 7 or 8 degrees min.

The higher altitude regions above 4000 meters are colder. The nights and mornings are freezing here. Days are also colder than in the lower regions. of this trek have negative degrees temperature. You should be ready for freezing weather in these areas. Though colder, nights are clear with millions of stars twinkling in the sky. Carry some warm clothing to protect you from the cold. The weather at high altitudes like Thorong La pass can change drastically at any time of the year.

Due to the features like warm and bright days and least chances of rain or snowfall, October-November is the busiest time of the year in Annapurna circuit. 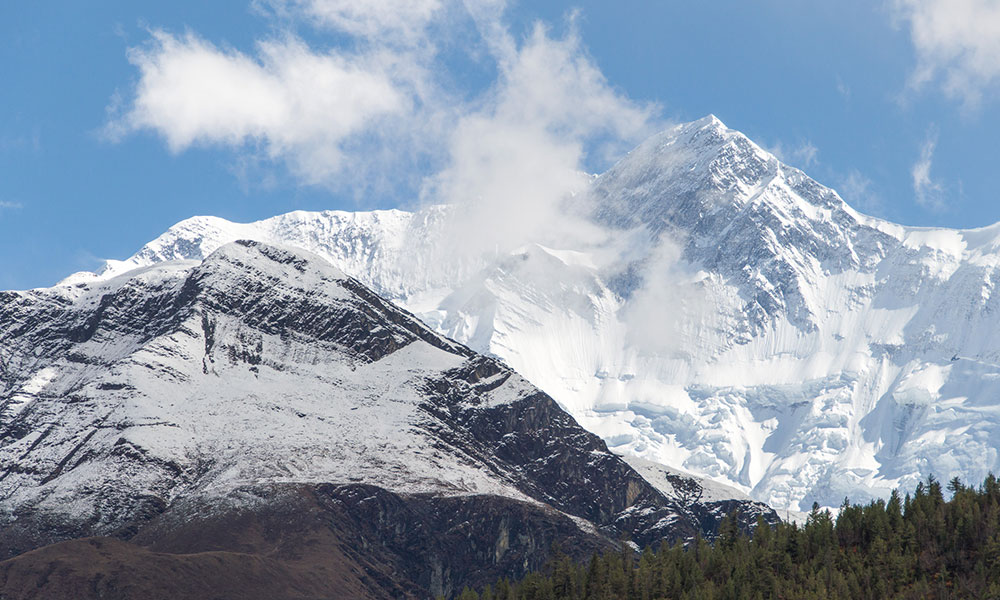 Spring (March to May) is the time when the harsh and icy winter goes away welcoming warmer weather. Spring is the season of colors. The wildflowers including the Rhododendron are in full bloom in Spring. The snow over the trails at high altitude places will also melt.

The atmosphere becomes bright, warm, and clear with least chances of unstable weather. In the lower elevations, the temperature averages around 10 degrees Celsius. During early March, it’s quite chilly. But the days become warmer day by day. Nights are still colder than the days. Remember, you’ll need warm clothing for the nights.

At places above 4000 meters, the evenings and mornings are nearly freezing. Put on your warm clothes and go out to watch the beautiful sunrise and sunset views.

The semi-arid lands of Mustang get uncomfortably hot during days. Drink plenty of water and wear summer clothes in layers.

Monsoon and Summer (June, July, and August) coincides in Nepal. In early June and late August, there won’t be as much rainfall as in July. July is the month when the Annapurna region gets lots of torrential downpours.

The northern regions in the Annapurna region include the rain shadowed areas. These reasons experience very little rainfalls. This makes some of the Annapurna treks like Upper Mustang Trek, Dolpo Trek, and Tsum Valley trek favorable for trekking in monsoon.

The parts of the trail that does not make the rain shadowed areas experience occasional heavy downpours. It rains almost every afternoon. The rain continues through the night and stops in the morning. The rainfall makes the trekking trail wet and slippery. Also, the summer bugs like mosquitoes and leeches will be highly active on the trekking trail. Wear hiking boots with sturdy soles and get some insect repellants.

The water bodies of the area come to life. The streams, rivulets that are dry in the other months are alive in these months. You can enjoy lush green vegetation, flora, and fauna of the area. 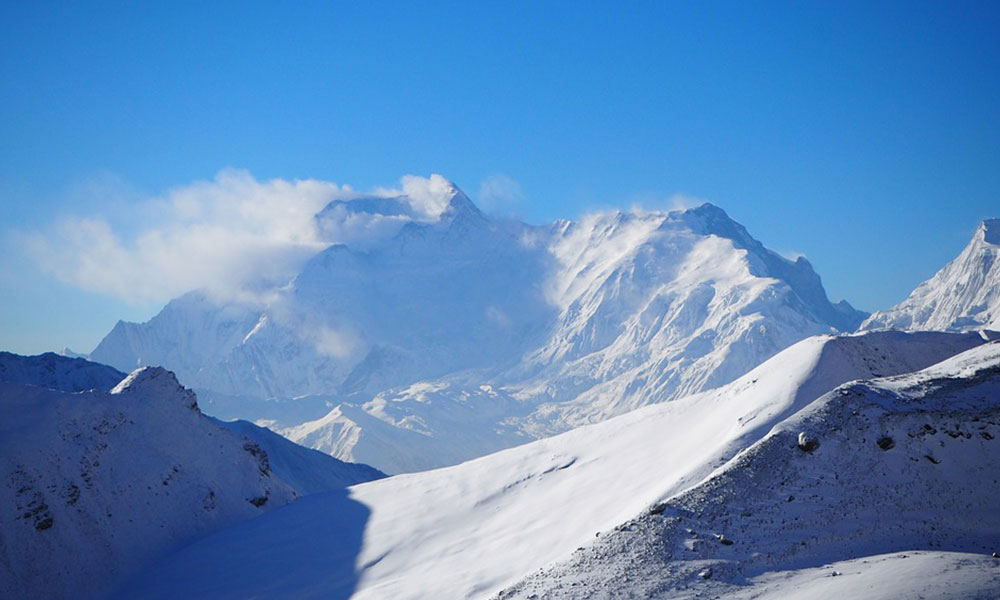 Winter (December, January, and February) are the winter months in the Annapurna region. Winter is the coldest time of the year. During this time, you will snow on the trails at the upper regions on the trek.

At Thorong La pass, there will be huge snowfalls in winter. Also, the weather will remain very unstable. At the top of the pass, the snowstorms might blow. Also, there can be avalanches too. In the middle of winter, the pass remains closed due to heavy snowfalls and bad weather conditions.

Before going to the trek in winter, you must check about the currently prevailing weather conditions in the region. To avoid the blocked passes, you can go to Annapurna Circuit Trek in early December.

The higher altitudes like the Thorong La pass have temperatures below freezing point. The higher regions receive occasional snowfalls as well.

Nights in the higher altitudes are always colder. You will experience a vast difference in the temperature between days and nights at the Annapurna Circuit.

This trekking includes crossing the Thorung La pass, 5416 meters. The top of the pass is higher in altitude than the Everest Base Camp. It is a nerve-shaking pass if you attempt the climb the pass in difficult seasons.

The variable weather and temperatures during Annapurna Circuit trek can introduce various difficulties while trekking. Some of them are:

Due to harsh weather and climatic conditions at the passes, the passes remain block. The passes are regulated only after the weather becomes fairly stable and the huge bumps of snow at the passes melts. Due to blocked passes, you might not get to do the round Annapurna Circuit trek in mid-winter.

Except for the rain shadowed areas, the other regions in the Annapurna Circuit receives heavy rainfall during the monsoon period. Due to the occasional rainfalls, the trekking trails will get muddy and difficult to trek over. You must wear good hiking shoes having soles with grips. Also, you have to be more careful while making it through the Thorong La pass. 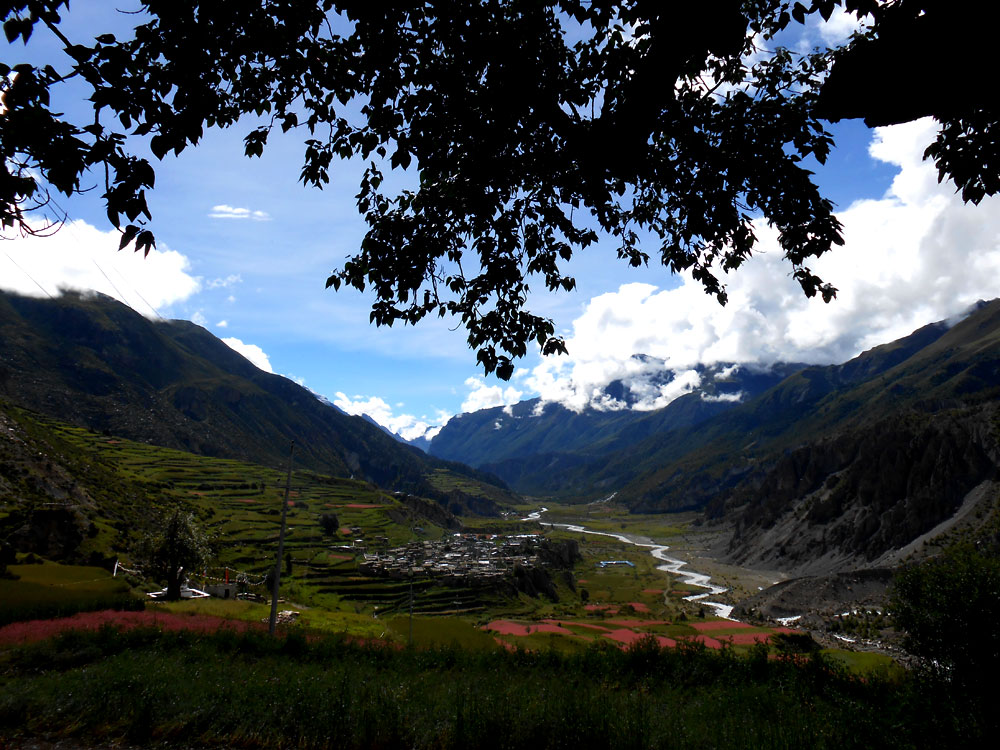 There are no seasons when the Annapurna Circuit trek isn’t doable. When do you want to trek is your preference. Every season has its own pros and cons. So, with smart preparation, clothing, gears, and supplies, you will have a beautiful Annapurna Circuit Trek 18 days.

We recommend Annapurna Circuit treks during Autumn and Springs as these are the best time for Annapurna Trekking. If you do not have time to go in these seasons, then you can also trek in the other seasons. Or you can simply choose to trek in the routes that are suitable for trekking in offseasons.

Do not hesitate to contact us, if you are planning your Annapurna Circuit Trek. We will be happy to organize a beautiful trek for you. Let us know when you are free. High Camp Adventure is a renowned trekking company in Nepal that organizes and arranges the beautiful treks and tours in Nepal.