Chitwan National Park is one of the biggest and the most diverse national parks of Nepal. Chitwan National Park is situated in Chitwan district, which has a topography including both the plains, also referred as Inner Terai, the forest areas, and the hills. With an altitudinal range between 100 m and 815 m, and the presence of water bodies like Bishazari Lake Complex and Narayani and Rapti River System within the park, its climate isn’t the same everywhere. Because of these reasons, there is an interesting ecosystem present here that is able to harbor many kinds of vegetation, and nestled among them are numerous species of birds, animals, insects, reptiles, and other creatures including aquatic life. Due to this natural assortment, the park is the most preferred location in Nepal for jungle safari and wildlife exploration. It was established in 1973, and in 1984, it was declared as a UNESCO World Heritage site.

Around 68 species of mammals live inside Chitwan National Park. These include mammals like Smooth-Coated Otters, Striped Hyenas, Honey Badgers, Yellow Throated Martens, Asian Palm Civets, and so on. Two of the most prominent animals in the park are One Horned Rhino and Bengal Tiger. One Horned Rhino and Bengal Tiger are so special that many local company logos, the names of the streets here, and so on are based on them. At one point of time, these animals were almost extinct. But by enforcing strict laws and continuous efforts from the side of the park authority, their number has stabilized.

In the same way, around 543 species of birds have been recorded in Chitwan National Park on an average. The number of different species of birds in the park is recorded every year, around the year, as it might vary because of the number of incoming and outgoing migratory birds. The birds recorded in the park, both local and migratory, include species like White Throated Kingfisher, Spotted Eagle, Bar Headed Geese, Grey Crowned Prinia, Paradise Flycatcher, and so on. Many species of birds recorded here belong to endangered species, for instance, Black Chinned Yuhina and Blossom Headed Parakeet. 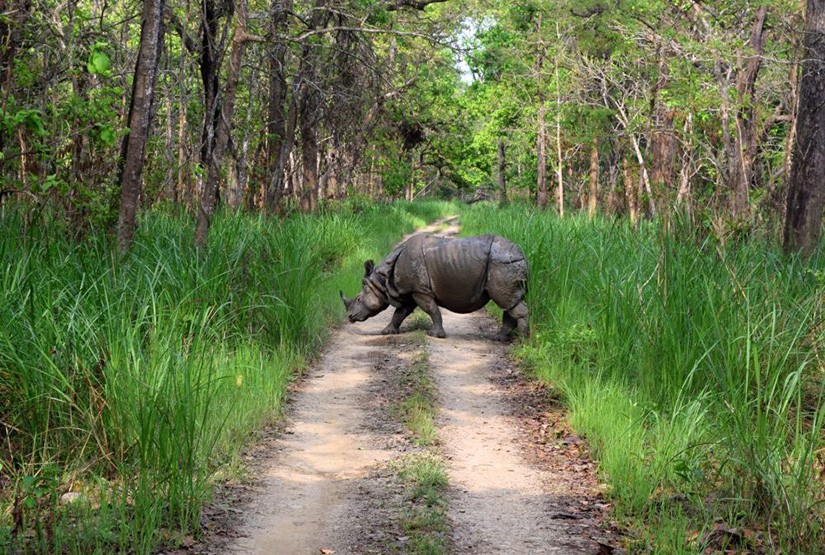 Altogether, around 700 species of animals consider Chitwan National Park as their home. This includes insect species like butterfly and moth, reptile species like King Cobra, Monitor Lizard and Rock Python, amphibian species like Mugger Crocodiles, Gharials, Starred Tortoises, and so on, in addition to the 68 species of mammals mentioned above. You can also find countless species of vegetation in Chitwan National Park. Few of them include Sal, Chir Pine, Rose Wood, Elephant Apple, Grey Downey Balsam, and so on. Many sections of the park are filled with savanna and grasslands. There are around 50 grass species here, which include the biggest one, Giant Cane and Khagra Reed, also called Elephant Grass.

Elephant ride, Canoe ride and Jeep ride; all three of them are one to two hours of ride on elephant, canoe and jeep respectively. Needless to say, while the elephant and jeep takes you through land and allows you to explore the wildlife on land, the canoe takes you through the river, and allows you to explore the aquatic wildlife. Generally, hiking inside the park is not allowed, unless you have some special pass, or are accompanied by expert guides. If you’re lucky, during your jungle safari in Nepal, you can spot Bengal Tiger. It’s established that Tiger in Chitwan National Park, and even One Horned Rhino, are the most sought after animals. Everyone wants to spot the Tiger in Chitwan National Park.

Chitwan National Park Safari, or Chitwan National Park Tour overall, isn’t just about spotting the rare and endangered species. The journey inside the park helps you get connected to nature. The greenery in the area is refreshing and absolutely beautiful. Though there are no high hills and mountains here, but the scene of the setting sun at the horizon, and that of the rivers and lakes will make you fall in love with the place. The mahout controlling the elephant, and the drivers of the jeep and the canoe will tell you stories and give you all the interesting information about the national park, the animals, and so on, during the ride. All these experiences combined make Chitwan National Park Safari a fun tour overall.

Other Activities In and Around Chitwan National Park

On the eastern part of Chitwan National Park, the village of Sauraha is situated, and on the western part, the village of Meghauli is located. You can make a visit to these villages, and get to know about the lifestyle of Tharus. It is an indigenous tribe that has been living in the area for centuries. Their culture, lifestyle, food, language, attire, and so many other attributes are sure to interest you. To help you get a whiff of their cultures, the resorts tend to conduct a cultural program, including performances by the members of the Tharu Community. You are going to fall in love with the art form that they display.

Other thing to do in Chitwan is to visit Elephant Breeding Farm. Here, you can witness the elephants in the different stages of their life. You will find this place particularly interesting if you love elephants. In case you can’t get enough of them, you can also attend elephant bathing, where you can witness the mahouts giving a bath to the elephants. Jump in and these fun loving animals would spray gallons of water on you with their trunks. A lot of tourists find this entire session quite enticing and satisfying.

If you love museums, records of history, culture and wildlife, and so on, there is just the place for you. Actually, there are two. At a distance of around 6 km from Chitwan National Park, there is this place called Ratnanagar, which houses Tharu Cultural Museum and Research Center and Wildlife Display and Information Center. As you might guess, the former tells you more about the local Tharus living in the region, where as the latter one focuses on the animals that have live in the park in the present, or once lived in the past. If you have a couple of hours, you could visit these centers, and look around the place.

Whether you’re someone who loves nature and wildlife, or are simply looking to have a time-out, away from the mundane city life. Chitwan National Park has something for everyone. Even when you choose to not walk around the forest, you can simply relax at the resorts here at Chitwan National park. With the amazing services that they offer, you can have a great possible weekend or any other day here. 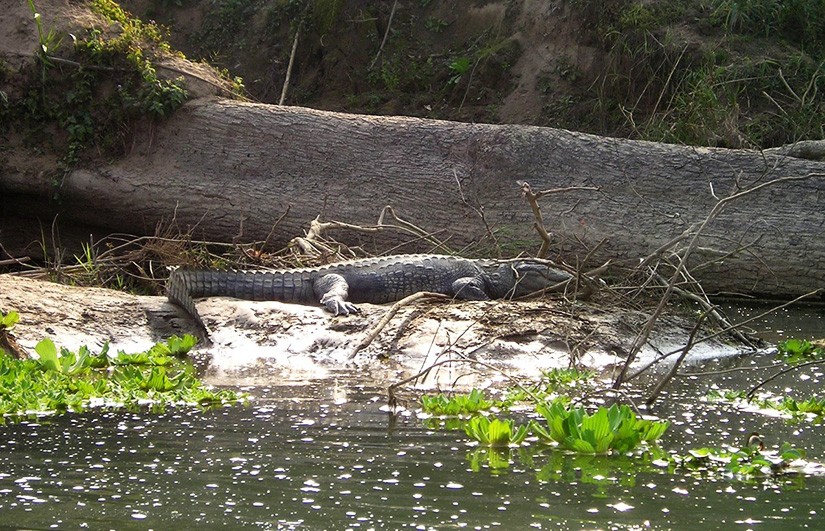 High Camp Adventure is a travel partner that takes care of all your needs during the journey. They ensure that you’re satisfied with the trip, and are having a great time during the tour. They try their best to cater to all your interests, even asking for your opinion about the itinerary, so that changes could be made, resulting in the journey becoming more personal. The packages offered by them includes activities such as trekking, expedition, luxury tour, helicopter tour, mountain flight, and so on. Their itineraries feature the most popular and off the beat locations in countries like Nepal, Bhutan and Tibet. So, if you’re looking for an ideal holiday destination, and a travel partner that would manage everything for you, so that you are able to focus only on the fun, contact High Camp Adventure today. With them accompanying you on your holiday, you can be rest assured about having the most pleasant time.