If there is one word that comes to the mind of the people when they think about Swayambhunath Stupa, well, it’s divine. There are 7 UNESCO World Heritage sites in the valley, and without a doubt, Swayambhunath Stupa is one of the prominent ones among them. Situated over a tall hill, one can spot it from any location in Kathmandu. Swayambhunath Stupa isn’t a separate structure, it’s actually a part of a complex full of heritages. The entire complex, along with the stupa, is so godly that it feels as if it is watching over Kathmandu Valley.

Swayambhunath Stupa is an important Buddhist pilgrimage site for Buddhists living all over the world. Every year, thousands of devotees come to this auspicious location to pay their homage. Swayambhunath Stupa is a heritage that is of importance not just to the Buddhists, but also to the followers of other religions. Swarms of devotees tend to visit the temple on numerous religious occasions. There is something quite charming about this hill, and Swauyambhunath Stupa that is located on top of it. The temple is significant religiously, and also, it offers the most wonderful views of the entire Kathmandu city. No matter the purpose of the visit, when a tourist comes to Nepal, they make sure to visit Swayambhu stupa at least once. To reach the temple, you need to climb a long flight of stairs, which could be too tiring for few people. There’s also another way at the back built for the vehicles. So, you could also reach the top in a taxi.

As per the mythology, it is believed that the complex of Swayambhu temple self sprung during the time when the entire valley was filled with water. However, if we’re to go as per history, we come to know that Swayambhu temple complex was established by King Vrsadeva, in the early 5th century. Swayambhu stupa complex consists of the main stupa, and apart from that, numerous smaller stupas and temples. Since there are so many heritages here, dedicated to the gods and goddesses of the Hindu mythology, the complex proves to be quite significant for the Hindus as well. A few of these religious structures suffered heavy damage during the earthquake that occurred in 2015, however, the overall structure of the complex of swayambhunath after earthquake remained intact, and while some damages were quickly nullified, some took time. Swayambhunath after earthquake is considered quite safe to visit.

Every Nepalese, well, at least the ones who’s lived in Kathmandu or has visited the city finds Swayambhunath stupa associated with their childhood memories. It wouldn’t be a mistake to say that it is one of the most popular weekend spots for families. Kids find the monkeys going about their own way quite amusing. The entire hill, the temple and the surrounding areas are full of them. It is for this reason that  Swayambhunath Stupa is also called the monkey temple. The creature is one of the reasons why the kids get extremely excited at the thought of visiting the monkey temple. However, it’s recommended that you stay away from them. They have the tendency of grabbing and stealing away things. On various occasions, they’ve also hurt people, and especially kids. The trick is to stay as far away from them as possible, and not carry too much food around them. And if you happen to confront them, just ignore and go about your way. 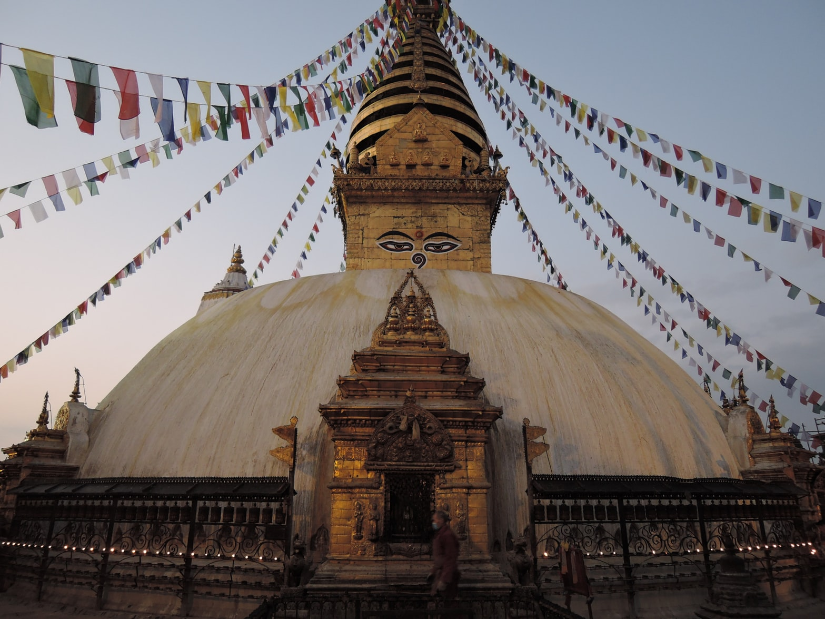 World Peace Pond Swayambhunath is one of the significant elements of the complex, despite the fact that it isn’t quite the part of the main complex. If you’ve reached the temple by climbing the stairs, you have to circle the stupa half way around, and climb down the stairs to reach World Peace Pond Swayambhunath. Else, you can take the road situated at the back of the hills, and reach the parking spot at the top. The pond is right beside the spot. In and around the temple complex, you will find so many things to see and explore. For instance, Swayambhu Buddhist Museum, Harati Temple or Ajima Temple, Shakyamuni or Dipankar Buddha statue, Shantipur or the temple of Shantikaracharya, and so on. Making a visit to the complex will allow you to gain a deep insight into the mythologies of both Hinduism and Buddhism overall.

Apart from Swayambhunath Stupa, there are 9 other UNESCO World Heritage site in Nepal. Kathmandu Valley has 6 of them, whereas others are located outside the valley. While the ones located inside the valley are mostly religious, cultural and historical heritages, the ones located outside are mostly natural. Getting to explore these UNESCO World Heritage site is an absolute pleasure. You’re guaranteed to feel as if you’ve just finished a roller coaster ride, in the end, after you’re done exploring all these wonders.

World Heritage Site in Nepal consists of the world heritage sites that are not in the Kathmandu Valley. These attractions include Chitwan National Park, Sagarmatha National Park and Lumbini. While the first two allow you to explore the natural beauty of Nepal, the latter one, allows you to further explore religious and cultural significance. Sagarmatha National Park is the home of numerous endangered animal species, but most importantly, the main reason why people visit this national park is for the purpose of trekking and expedition. The park is home to mountains like Everest, the tallest in the world, Ama Dablam, Nuptse, Lhotse, and so on.

In the same way, Chitwan National park is also famous for numerous endangered animal species. But the two animals that it’s most famous for are One-horned Rhinoceros and Bengal Tiger. You could explore the park on an elephant, on a jeep, or  on a canoe. You can go for a tailored Chitwan Jungle Safari tour. And finally, Lumbini, which is the home to Mayadevi Temple, and numerous other Buddhist heritages. The temple is said to have been built on the spot where Gautam Buddha was born. Quite near to the temple is the holy pond, where Buddha’s mother is said to have bathed after giving him birth. And then, there is the Ashokan Pillar, which is said to have been established by King Ashoka of India. Lumbini Pilgrimage Tour is the best way to visit the place. 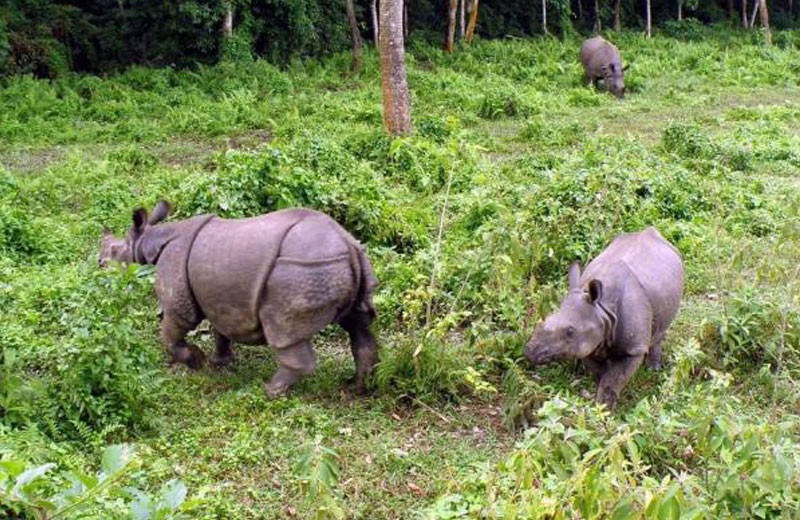 Apart from Swayambhunath Stupa, there are six other World Heritage Site in Kathmandu. Kathmandu Valley has three cities in them. The first one is Kathmandu, which is home to Kathmandu Durbar Square, Swayambhunath Stupa, Pashupatinath Temple and Boudhanath. The second one is Bhaktapur, which is home to Changunarayan Temple and Bhaktapur Durbar Square. And the third one is Lalitpur, which consists of Patan Durbar Square. Among them, Pashupatinath Temple and Changunarayan Temple are dedicated to Hindu gods Shiva and Vishnu respectively. On the other hand, Swayambhunath, as mentioned above, and Boudhanath are Buddhist religious heritages, with a slight influence of Hinduism.

In the same way, Kathmandu Durbar Square, Bhaktapur Durbar Square and Patan Durbar Square are palace square with numerous religious and historical structures. These consist of mainly the palaces, the palace squares, and temples dedicated to Hindu deities. You will find a striking resemblance between the three palace squares, mainly because the kings who were responsible for their establishment were brothers. And though they separately ruled over these three cities of the valley, they seemed to be quite close to each other. 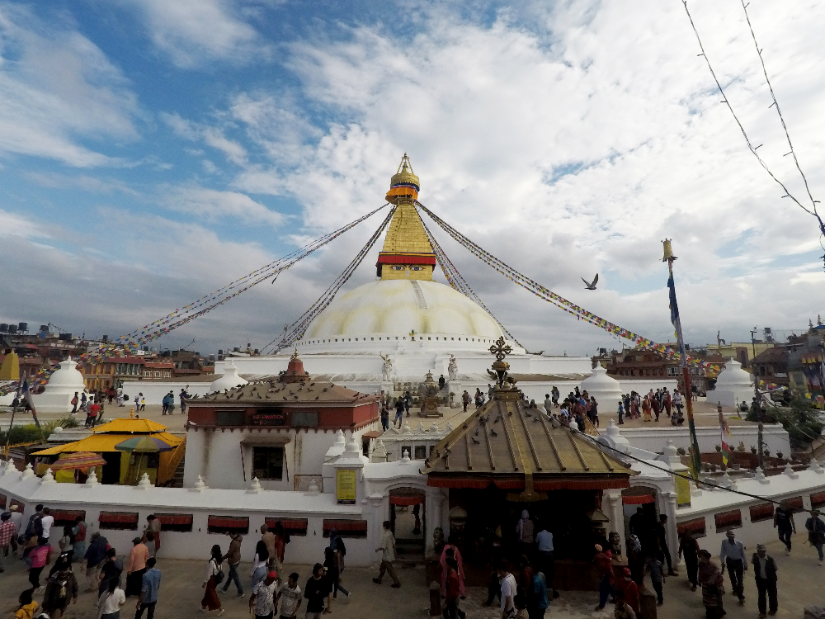 Whenever you come to Nepal, make sure to visit these UNESCO World Heritage sites. Even if you’re not able to explore all ten, try to cover at least the ones located in the Kathmandu Valley. Swayambhunath stupa, along with the other world heritage sites, is sure to amuse you. As these heritages are mostly religious in nature, they’ll definitely help you gain a deep insight into the religions followed in the country, mainly Hinduism and Buddhism. The best thing to do is to visit these places during festivals. You will get to explore a different side of these heritages.

High Camp Adventure is an affordable, reliable and experienced travel and tour operator in Nepal. They specialize in trekking and expedition, however, provided that you’re quite into challenging activities, you could go for one of their luxury tours like helicopter tour, mountain flights, jungle safari, and so on. Their itineraries feature the most exciting tourist destinations of not just Nepal, but also countries like Tibet and Bhutan. One of the best things about them is that they focus on client satisfaction. They even allow their clients to make changes to the itinerary, as far as practicable. Their intention is to make the journey as personal and close to the heart of their customers as possible. No matter the nature of your trip, during the first couple of days in Kathmandu, you tend to go sightseeing around the city. High Camp Adventure ensure that you don’t miss out significant locations like Swayambhunath Stupa. If you’re looking to spend your upcoming holidays in any of these countries, well, make sure to contact High Camp Adventure. With them by your side, your holidays are going to be absolutely amazing.

You might want to check  our Package which takes you through the world heritage sites in Nepal: